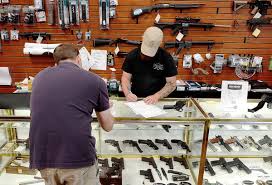 Criminal background checks needed to buy guns are still being processed, despite the government shutdown. There had been media reports leading up to the shutdown that gun sales might be impacted because the Bureau of Alcohol, Tobacco and Firearms would not be processing firearms permits. An FBI spokesperson in Texas says the National Instant Criminal Background System (NICS) is still up and running.

One Texas gun shop owner says he checked with the NICS after several customers told him they were concerned the shutdown would impact their ability to buy guns. He also says sales are up in the days since the government shut down.

The workers who run the NICS are still working, despite shutdown. That’s because the NICS is viewed as an essential operation of the federal government. However, NICS workers are not getting paid during the shutdown.

The NICS is used by gun sellers to find out if a prospective buyer is eligible to buy guns or explosives. The system is usually available seven days of the week and on all holidays except Christmas. The NICS was created as part of the Brady Handgun Violence Prevention Act of 1993. It was first launched by the FBI back in 1998. The act itself is named for former White House Press Secretary James Brady, who was shot and suffered a traumatic brain injury during the attempted assassination of President Reagan in 1981.

The questions about gun sales and background checks come during a busy season for hunters around the U.S. In Oregon, hunting season is underway and gun shop owners say business during the first week of the season has been brisk.