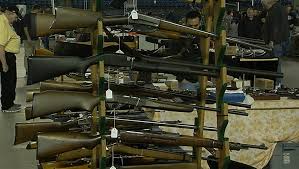 So does that mean that universal background checks will soon be the norm at gun shows? There are currently some background checks in place at some gun shows in the state. Private dealers and sellers must verify that every buyer of a firearm is of legal age to buy a firearm. Sellers must record the serial number and the price of the firearm. All buyers must sign a statement saying they are legally allowed to own a gun.

Many exhibitors at gun shows are licensed firearms dealers who are required by law to conduct background checks on all buyers.

Now the debate moves to the Tacoma City Council. It will consider a resolution this month to eliminate a possible gun show loophole for gun shows held on city property. The resolution would require a successful background check prior to any firearm sale, purchase or transfer, including where the seller is not a federally licensed firearm dealer. This would cover all gun show events held on property operated or owned by the city of Tacoma.

Voters will also have a say in the debate. There will be initiatives on the November ballot. One would require background checks for all gun sales in the state of Washington. The other would prohibit background check that are not supported by federal law.